Some food items can sometimes cause the Actifry™ paddle to get stuck. 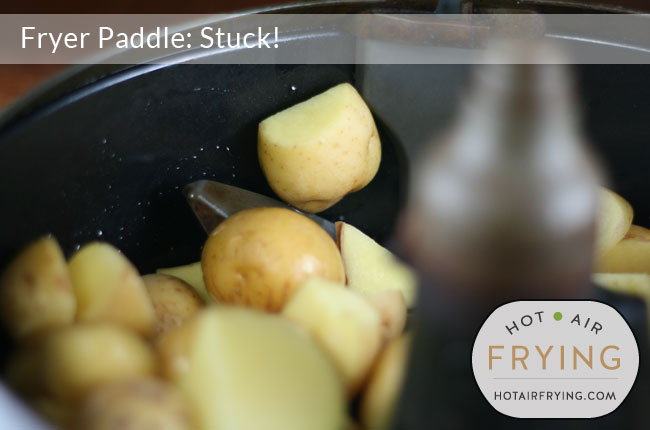 The Actifry bowl / pan has a large “seam” on it, where the handle is affixed to the pan.

This handle seam has an important function: it causes food to flip over when the paddle guides food up against it. If you watch your Actifry in operation sometime, and watch that area of the pan, you will see what I mean. 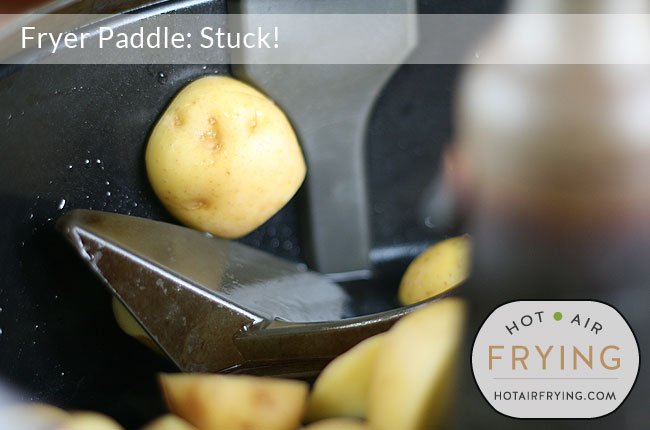 Sometimes, though, a piece of food will come up against that seam in exactly the wrong way, and get trapped between the tip of the paddle, and the seam.

Soft food, such as a piece of broccoli, a mushroom, or a fully cooked piece of potato, will give into the pressure and pop out of that area, and so never cause a problem.

But a hard piece of potato that is just starting to cook can be just the right size, and just the right firm consistency to stand up against the pressure of the paddle,  hold its ground and thus cause a blockage. 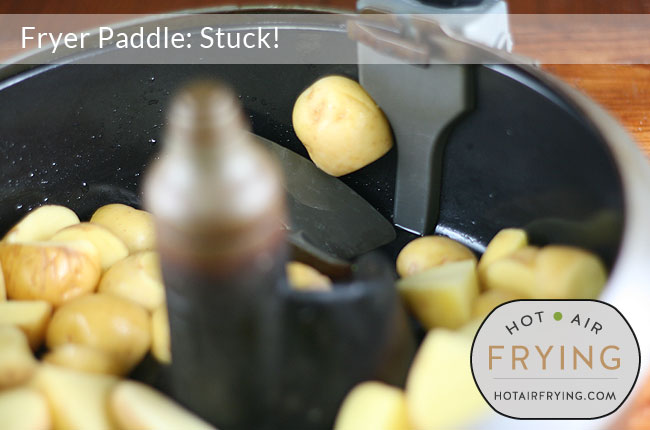 In these photos, you are seeing an actual real-life, as it happened, blockage caused by half a new potato, part of a batch of baby potatoes that were being roasted.

The paddle started making a grinding noise as it tried to forge ahead with its turning, while the hard chunk of potato fought back equally hard to prevent its doing so.

Sometimes, this can happen two or three or four times during the initial few minutes of roasting small chunks of potatoes such as these — until the potato starts to become too soft to stand up to the force of the paddle.

Luckily, when the Actifry is running I am never out of ear shot of it for long, on purpose. When any kitchen appliance is turned on, I am always mindful of it.

I would say that, if you are cooking risotto in your Actifry, the risk of your paddle getting stuck is low because rice grains are too small to cause a blockage. If you are cooking chips / French fries, the shape is generally wrong to get caught and cause a blockage. But chunks of potato such as the above are exactly the ideal size and shape for filling up that space between paddle and seam, as well as being hard enough to stand up to the force of the paddle, so do be extra conscious please when doing those.

There may be other types of food items prone to causing the same problem; I just haven’t encountered them yet.

In short, my advice is to never go far enough away from your Actifry that it is unattended. 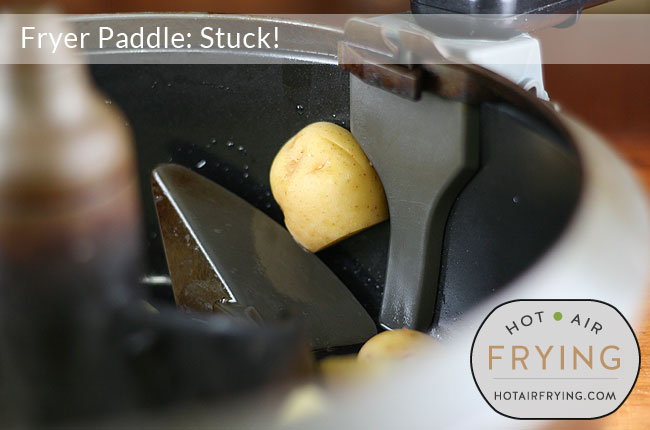