Summary: When the regular Actifry™ (model number range FZ7000 etc) was first introduced around 2007 / 2008, there were several issues encountered with the paddle in the UK and in Europe. These issues were later largely cleared up by the release of a better designed paddle.

WHICH consumer magazine in the UK reported in October 2010, “Tefal have claimed the paddle issue was resolved, via product development, during 2008 …” [1] https://www.which.co.uk/home-and-garden/home-appliances/reviews/fryers/tefal-actifry/customer-views/

This is a recount of those historical issues with the first paddle on the FZ7000 line, for the record, to clarify that the design issue was resolved. 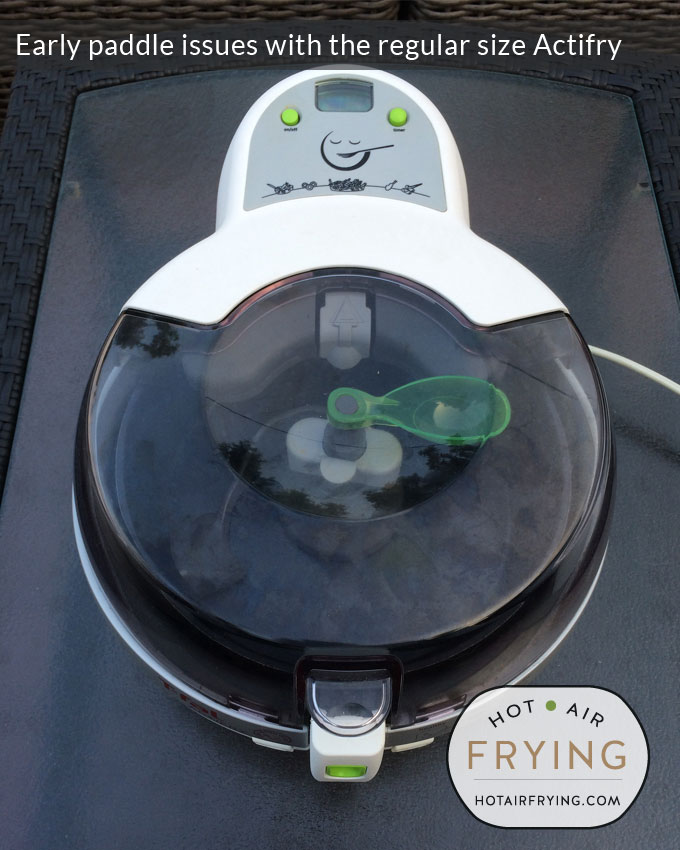 The following is feedback left from 2009 to 2011 found in various places on the Internet concerning the first paddle used for the FZ7000 line. (Note that as some smaller stores may hold items in stock for years before selling them, it is possible that models with the first, weaker paddle from 2009 were not sold onto people until several years later.)

Newly designed paddles for the Actifry FZ7000 line were introduced by the start of 2010. They were fed into the replacement part supply chain, as well as shipped standard with new machines leaving the factory.

“My replacement paddle has just arrived this morning from Wesco. It’s the new version with a positive action to grip the pan” [8] 1 August 2010. Avforums Review Comment. Retrieved August 2014.

“My third Actifry has developed a snapped paddle …. Checked one my son bought recently and that one has a cross reinforcement under the narrow part of the paddle so obviously a recognised problem. [9] 28 Dec 2010. Amazon Review Comment. Retrieved August 2014.

“We’ve had ours for several years with no problems at all except a broken paddle, which was a design fault which has been rectified in the current models.”  [10] 28 March 2011. Avforums Review Comment. Retrieved August 2014.

The new black-coloured “Gourmet” Actifrys also shipped from the start, in spring 2010, with the new paddle design: “Much better construction, the paddle comes off through a locking/unlocking mechanism, pan looks better, different filter,etc. And a vastly different cookbook with loads of recipes” [11] 30 Mar 2010. Avforums Review Comment. Retrieved August 2014.

Actifry paddle issues as of 2013 onwards

The stream of complaints (on the Internet, at least) dropped off rapidly with the introduction of the new design paddle. Still, the odd report of a broken paddle still emerges. The following user reports purchasing a machine in approximately November 2011 and having gone through 3 paddles by March 2013. It’s not known if a store had perhaps sold the user in question an older-stock  machine with the older paddle, or what:

“I have had 2 new paddles as they snapped in half before the product was out of guarantee. The last time the advisor said it would not be replaced again free of charge. It has broken again, machine 17 months old, yet this paddle only 8 months old!” [12] 17 Mar 2013. Amazon Review Comment. Retrieved August 2014.