You are here: Home / Models of Hot Air Fryers / Actifry™ / Actifry™ Use & Care / Actifry overheating issues in the early years

Summary: When the regular Actifry™ (model number range FZ7000 etc) was first introduced around 2007 / 2008, there were several issues encountered with the machine overheating in the UK and in Europe. Frightened customers to whom this happened were very unhappy — and vocal — about how Tefal handled the issue.

The issue has long since been cleared up by Tefal redesigning the machines.

WHICH consumer magazine in the UK reported in October 2010, “The faulty fans were replaced at the end of 2008, which mean[t] anyone who bought the product in the early part of 2009 may still [have been] affected by the fan issue. ….” [1] https://www.which.co.uk/home-and-garden/home-appliances/reviews/fryers/tefal-actifry/customer-views/

The purpose of this page is to address the concerns of people who may trip across historical reports of the issue: to acknowledge the issue, to confirm that it was restricted to the first release of the original Actifry model and restricted to units released in the UK / Europe and finally, to clarify — to the best of my knowledge — that Tefal resolved the design issue several years ago now. 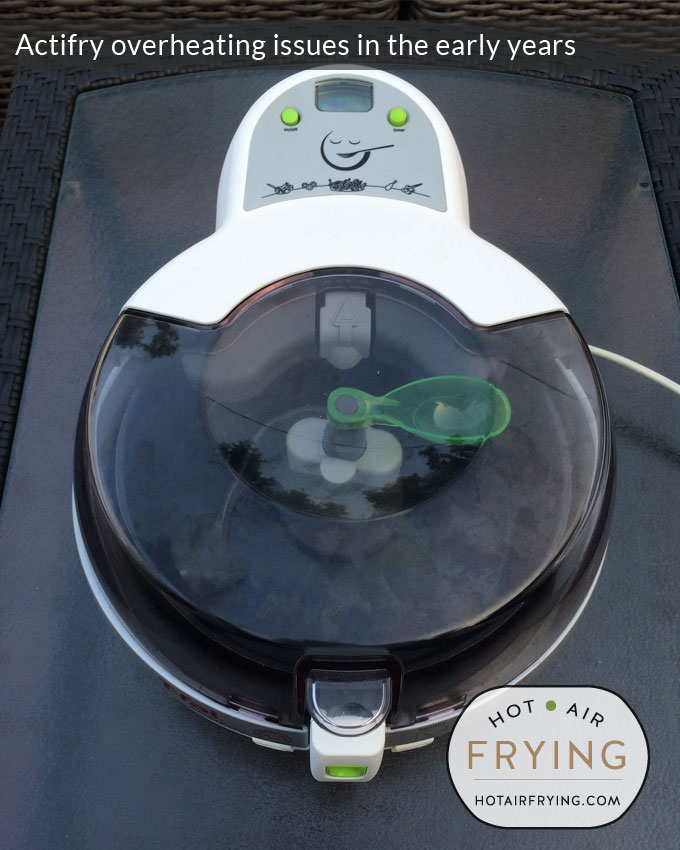 Some early Actifry customers reported fire risk with their Actifry machines sold in the UK. Some people mentioned a popping noise first, and / or blue flashes, then followed by a smell of burning wiring and / or smoke, and a few reported actual flames.

Customer reports were backed up by a BBC Television watchdog report in November of 2008 called, “Chip pans up in smoke.” The watchdog team, reputedly, was able to simulate “fan failure and showed the resulting flames because the heating element did not cut out.”

The fault also existed in some models sold in France:  “Bought mine from Darty as we live in France. After some months it caught fire and smoked out my kitchen. It was repaired and after another year it did the same again – The fan stops and the hot air heater glows and catches fire.”[8] 4 Sep 2011. Amazon Review Comment. Retrieved August 2014.

The problems were reported sporadically up until 2014, resulting either from machines bought back in 2007 – 2009 but little used, or from a store selling an old-stock item. Here’s a report from April 2014:

“My Actifry was purchased in 2009 but has had very little use, it has within the last two days made a banging noise and then started smoking, it was a present and the same thing happened about two years ago to the Actifry of the people who had bought me mine.”  [10] 16 Apr 2014. Amazon Review Comment. Retrieved August 2014.

Tefal may have instinctively first gone into “deny” mode, which worked in the old days when it was one customer versus one large company. In the new era of social media, however, customers banded together online and left a permanent record of how unhappy they were with the service they received over this issue.

Many people were incredulous: they had just had one of Tefal’s products blow up in their kitchen, and this was the support response: “I purchased mine in April 08 and just before xmas [2009] it caught fire. I have just contacted Tefal and was advised that i could return it and have it repaired at my cost or i could purchase another one from them at a cost of £115.” [11] 10 Jan 2010. Amazon Review Comment. Retrieved August 2014.

Tefal rejected the 2008 call — from a product test lab associated with the BBC — for an outright recall of the product.  [12] Tefal issues advice over Actifry fire concern . A product recall apparently would have had to be quite extensive, as the issue perhaps was more random than simply being attributable to a bad batch (and as we’ve seen above, a single country): “Whilst speaking to Lakeland, the lady there took my serial number (on the bottom line of the label underneath), and when asked if she could tell me if there is a rogue batch which could be identified from serial numbers, she said she was not aware of a rogue batch. She was also surprised Tefal had not recalled the product – however, if there is no rogue batch of serial numbers a recall would involve many thousands.” [13] 5 Nov 2008. Avforums User Comment. Retrieved August 2014.

Tefal did, however, acknowledge the issue: “221 (0.4%) of the 55,000 Actifry units sold in the UK have been reported to suffer from a faulty fan motor overheating.” [14] Tefal issues advice over Actifry fire concern .

Tefal resolved the overheating issue in 2008

Customers were reporting the issue resolved as early as November 2008:

After this, the volume of overheating reports began to die down quickly. It didn’t go away immediately — remember, Tefal did not do a product recall, and some people could have been sold an older-stock model, or, units which were sitting unused in homes could finally have been pressed into service giving the fault the occasion finally to manifest itself.

Tefal seems to have resolved the issue in 2008 by redesigning the machines.