You are here: Home / A hot air fryer is not necessarily an energy saver

Hot air fryers are not necessarily energy savers. It can depend how you use them and what you compare them to. 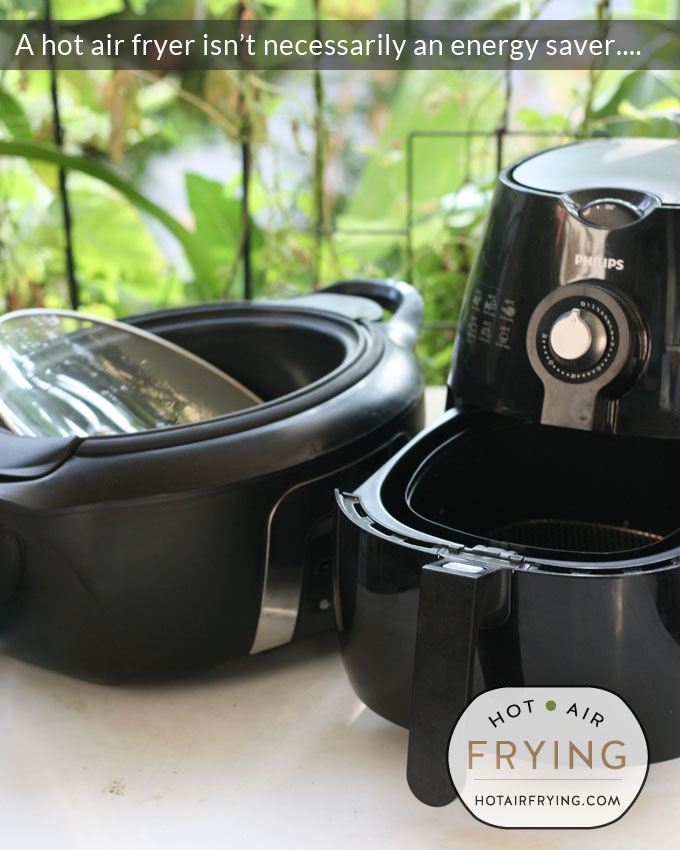 I will start with looking at two large kitchen appliances such as an oven and a refrigerator. These might seem like they are big users of electricity, but you have to remember that they are (a) insulated and (b) thermostat controlled, with the result being that they turn themselves off for long periods of time while they are at the desired temperature, and only turn themselves on for the time required to bring the temperature range back to the desired temperature.

Some ovens are only actually on one-quarter of the time they are being used [1] Cote, Doug. Slow Cookers and Energy Usage. https://www.stretcher.com/stories/01/010528j.cfm ; the US Department of Energy says that refrigerators are only actually on about one-third of the time. [2] Estimating Appliance and Home Electronic Energy Use. https://energy.gov/energysaver/articles/estimating-appliance-and-home-electronic-energy-use

In contrast, hot air fryers are smaller, but they are running all the time that they are being used, because they need to continuously blow superheated air.

And slow cookers aren’t the necessarily the great energy savers that people think they are, because insulated ones with thermostats only started coming on the market in 2013 : those dangerous hot sides you felt all those decades was constant heat being wasted out the sides.

We’re going to do a sample usage calculation here.

The formula that the US Department of Energy says to use is:

To keep it simple, we’ll assume we’re talking about a 1400 watt model of air fryer, and that we are cooking something that requires 30 minutes (.5 hours) of running time, such as half a kilo (1 lb) of fries. 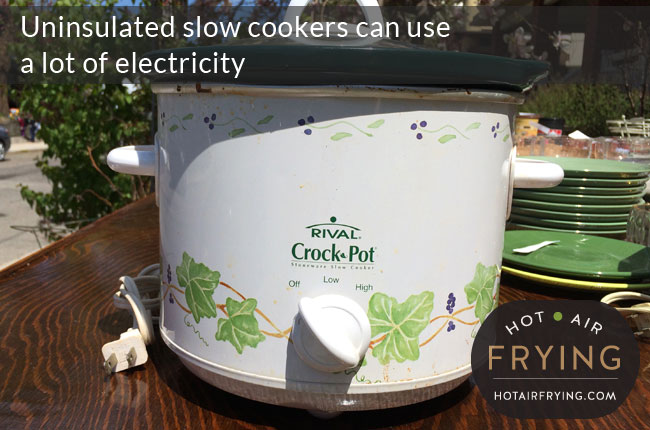 From the chart below, it appears that to cook something it could be more energy efficient to deep fry it, pop it in a small-sized slow cooker, or cook it in an oven, compared to hot air frying it.

I found a statement about an Actifry Classic from an Argos UK customer service rep who said, “Having looked into your query, I can confirm that a 1kg portion of chips will use an electricity consumption of 1kw over 40 minutes.” [5] https://answers.argos.co.uk/answers/1493-en_gb/product/4201386/questions.htm?sort=helpfulq&dir=asc

Probably the reason why deep frying is so energy efficient is that oil is one of the most efficient conductors of cooking heat that we have to work with.

Confusingly, though, I found a statement on the “Which” consumer site which read, “The Tefal Actifry is a fryer that Tefal claims will allow the user to fry enough chips to feed a family using only a spoonful of oil. This is said to make chips contain less fat, and the product more energy efficient.” [6]  https://www.which.co.uk/news/2008/11/tefal-issues-advice-over-actifry-fire-concern-162004/ which implies that the less oil, the more energy efficient.

I believe that the science is actually the other way around, but in any event, the wattage table above would seem to show that you are paying an electricity premium for healthier hot air frying over deep fat frying. (For sure, though, of course there’s the purchase cost and refrigerated storage cost for the oil, etc, as well.)

Industrial Design Consultancy, UK, says that during an Actifry’s (presumably a standard one) lifetime (and it doesn’t say what figure it used for that), which is used for 1 hour a week, will have a carbon footprint equivalent to driving a car for 1,000 km. [7] https://news.idc.uk.com/2012/santa-s-carbon-footprint-idc-analyses-the-co2-in-2012-s-top-christmas-gifts/ Most of that footprint is incurred not in the manufacturing, but in the usage.

Some will point out that if you’re really looking for the lowest-possible energy usage for cooking, you’ll be using a pressure cooker, and it’s hard to dispute that. It’s just a little tricky to get your fries brown and crispy that way (unless you’re talking pressure fryer here!)

I do not believe I am saving energy using a hot air fryer compared to other cooking methods, but then that wasn’t my goal for acquiring one.

But my goal was to save money — on the food budget.

At the time, we were ordering delivery food a couple times a week because of how busy life was, and the cost was starting to really hit home. So, my goal was to be able to produce “fast food” meals that were as tasty and tempting as delivery food, at a fraction of the cost — and that goal was achieved very quickly. Whatever little extra being spent on electricity now is nothing compared to the two or three hundred bucks that were being spent on delivery food monthly. So for me, there were cost savings immediately, though I recognize that is a pretty unique comparison situation.

All my other kitchen appliances are as energy efficient as the current state of the technology allows (I even switched to a modern insulated slow cooker), so I feel good about that.

Granted, whenever it’s possible, I do try to wait until cheaper electricity rates have started for the day before doing any cooking. But that’s a nice to have if cooking just needs to be done at regular rates for whatever reason.

All in all, taking into account that a hot air fryer uses high electricity, but only for a short burst of time, I would consider that using one incurs about normal energy usage / costs overall for a kitchen appliance.